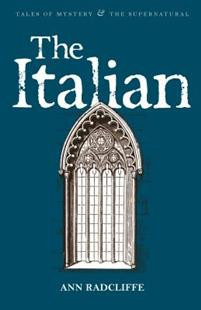 With an Introduction by Kathryn White.

’He saw her wounded, and bleeding to death; saw her ashy countenance, and her wasting eyes ... turned piteously on himself, as if imploring him to save her from the fate that was dragging her to the grave...’

Ann Radcliffe, author of The Romance of the Forest and The Mysteries of Udolpho, is the high priestess of the gothic novel. In The Italian, first published in 1797, she creates a chilling, atmospheric concoction of thwarted lovers, ruined abbeys, imprisonment and dark passages, with an undercurrent of seething sexuality and presents us with a cunning villain in the sinister monk Schedoni. A contemporary review commented on, ’Radcliffe’s uncommon talent for exhibiting, with picturesque touches of genius, the vague and horrid shapes which imagination bodies forth...’

Radcliffe’s work was hugely influential and H.P. Lovecraft, early twentieth century master of the uncanny, was impressed by the, ’eerie touch of setting and action contributing artistically to the impression of illimitable frightfulness which she wished to convey.’ The novel remains a fascinating, engrossing and unnerving masterpiece of gothic fiction.