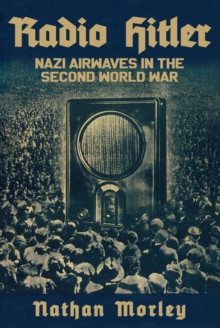 Radio Hitler follows the life of Deutschlandsender, the Nazi equivalent of BBC Radio 4, and its sister stations that transmitted to Germany and the world at large. Using first-hand interviews, archives, diaries, letters and memoirs, this book examines what Nazi radio was and what it stood for. Detailed here is the vast ’fake news’ effort, which bombarded audiences in the Middle East, Africa, the United States and Great Britain.

A light is also shone on the home service stations that, with their monumental announcements including Stalingrad, the assassination attempt on Hitler and the invasion of France, provided the soundtrack to everyday life in Nazi Germany. Details of entertainment shows and programmes designed to lift morale on the Home Front are abundant and offer a fresh insight into the psyche of the nation. The book also looks at Nazi attempts to develop television throughout Germany and in occupied France.

A rich cast of characters is featured throughout, including Ernst Himmler, brother of Heinrich, who worked as technical chief at Deutschlandsender, and Lord Haw-Haw, the infamous British mouthpiece of the Nazi propaganda machine. Nathan Morley had unlimited access to former Reich radio studios and transmitter sites in Hamburg, Berlin, and Vienna, as well as to a vast archive of recordings and transcripts. The result is a fascinating and revealing portrait of propaganda, communication and media in Nazi Germany.