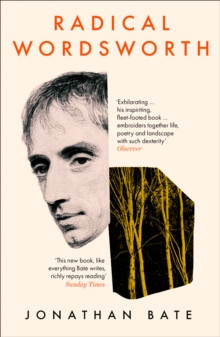 Radical Wordsworth : The Poet Who Changed the World

A Times and Sunday Times Best Book of 2020 ’Radical Wordsworth deserves to take its place as the finest modern introduction to his work, life and impact’ Financial Times ’Richly repays reading ... It is hard to think of another poet who has changed our world so much’ Sunday Times A dazzling new biography of Wordsworth’s radical life as a thinker and poetical innovator, published to mark the 250th anniversary of his birth. William Wordsworth wrote the first great poetic autobiography.

We owe to him the idea that places of outstanding natural beauty should become what he called ’a sort of national property’. He changed forever the way we think about childhood, about the sense of the self, about our connection to the natural environment, and about the purpose of poetry. He was born among the mountains of the English Lake District.

He walked into the French Revolution, had a love affair and an illegitimate child, before witnessing horrific violence in Paris. His friendship with Samuel Taylor Coleridge was at the core of the Romantic movement. As he retreated from radical politics and into an imaginative world within, his influence would endure as he shaped the ideas of thinkers, writers and activists throughout the nineteenth century in both Britain and the United States.

This wonderful book opens what Wordsworth called ’the hiding places of my power’. W. H.

Auden once wrote that ’Poetry makes nothing happen’. He was wrong. Wordsworth’s poetry changed the world.

Award-winning biographer and critic Jonathan Bate tells the story of how it happened.