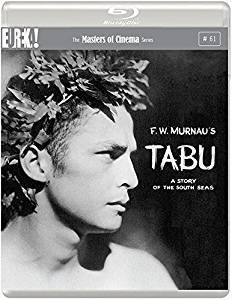 Tabu - The Masters of Cinema Series

SYNOPSIS In 1929, F. W. Murnau ( Nosferatu, Faust, Sunrise), one of the greatest of all film directors, invited leading documentarist Robert Flaherty ( Nanook of the North, Man of Aran) to collaborate on a film to be be shot on location in Tahiti, a Polynesian idyll in which Murnau imagined a cast of island actors would provide a new form of authentic drama and offer rare insight into their " primitive " culture. The result of their collaboration was Tabu, a film that depicts the details of indigenous island life to tell a mythical tale that is rich in the universal themes of desire and loss.

Subtitled " A Story of the South Seas ", Tabu concerns a Tahitian fisherman (played by an islander, Matahi) and his love for a young woman (played by fellow islander Reri, who went on to star on Broadway) whose body has been consecrated to the gods, rendering her tabu as far as mortal men are concerned. The lovers flee their island and its restrictive traditions, but will their love prevail in the " civilised " world?

This Oscar - winning film (the Academy Award went to cinematographer Floyd Crosby) is both poetic and simple in tone. The Masters of Cinema Series is proud to present - completely unc¬ensored and fully restored - this landmark film of rare exoticism and magical beauty, described by critic Lotte Eisner in 1931 as " the apogee of the art of the silent film ", for the first time ever on Blu - ray in its original aspect ratio.

New 1080p HD transfer on the Blu - ray of the Murnau - Stiftung / Luciano Berriat úa 75th anniversary restoration of the pre - Paramount, longer Murnau - approved version of the film, with uncensored scenes and titlecards, appearing in its original 1.19:1 aspect ratio for the first time
Full - length commentary track by R. Dixon Smith and Brad Stevens.
15 - minute German documentary about Tabu by Luciano Berriat úa.
Newly presented outtakes from the original shoot of the film.
56 - PAGE BOOKLET with articles by Scott Eyman, Richard Griffiths, and David Flaherty; an interview with the film s cinematographer Floyd Crosby; and the original story treatments written by Murnau and Flaherty for Tabu and its aborted predecessor Turia.

Faust - The Masters of Cinema Serie