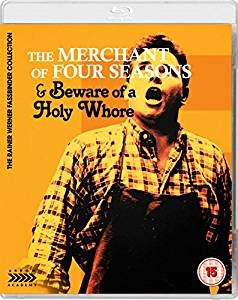 Merchant of Four Seasons/Beware of a Holy W**** Blu-ray

Made in quick succession in 1970 and 1971, Beware of a Holy Whore and The Merchant of Four Seasons represent a key stage in the career of Rainer Werner Fassbinder, the point at which he matured as a filmmaker and first began to attract an international audience.

A fictional recounting of the making of Whity, Fassbinder s take on the American West, Beware of a Holy Whore is a backstage melodrama set in a Spanish seaside hotel. Starring Lou Castel (Requiescant) as the director and Eddie Constantine (Alphaville) as himself, the film is an intriguing and often acidic look through the mirror at Fassbinder and his family of cast and crew.

The Merchant of Four Seasons concerns itself with Hans, a fruit seller, former Foreign Legionnaire and family man. Inspired by the discovery of Douglas Sirk s work and set, like those classic melodramas, in the 1950s Fassbinder charts Hans downfall with a perfect blend of poignancy and high drama. The Sirkian formula worked so well it would inspire a new phase in the director s output and produce such classics as The Bitter Tears of Petra von Kant and Fear Eats the Soul.

I Only Want You to Love Me